Then one of the elders said to me, “Don’t weep. Look! The Lion of the tribe of Judah, the Root of David, has emerged victorious so that he can open the scroll and its seven seals.” Revelation 5:5 (CEB) 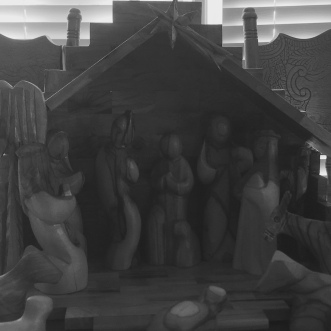 The other day, I was driving home from a “quick” shopping trip.  I had a few last minute Christmas items on my list and was feeling the stress of the Christmas crunch–lots of stuff to get and do, limited time and money.

As I was obsessing over how it was all going to come together–a random though flashed through my mind.  I slapped myself across the forehead and said aloud, “I forgot to put baby Jesus back in the manger!”

The week before, baby Jesus had been a prop in my Children’s Time message at church.  Afterward, I had casually tossed baby Jesus into an inner pocket of my church bag and hadn’t thought about him since.  It was only when I was feeling down and out that I remembered him–God’s great gift to his beloved children now sandwiched between old gum wrappers and lip gloss.

It’s so easy to get caught up in everything Christmas isn’t.  We stress over decorations and light displays, lose sleep over gifts and spending, crazily shove as many holiday activities as possible into our schedules leaving little time for self-care and reflection while forgetting the entire point of the holiday in the first place.

This week, it’s time to put Jesus back into the manger.  It’s time to put aside our Christmas lists, wrapping paper, cookie tins and stocking stuffers to focus on the fact that God sent his son into the world to redeem us.

More than that, God himself stepped down from his throne.  John 1 tells us that Jesus was with God when the world was created.  He was with God, and he was God.  Jesus was the Word who spoke all of creation into being.  Jesus sat at the right hand of the Father, had all of God’s power and authority at his fingertips and had thousands of angels at his command.  And yet, Jesus relinquished his status in heaven, his power and his might to come to earth as a vulnerable newborn.  Think about that for just a minute.  Jesus gave up everything he was so that he could come to earth and be completely dependent upon others. 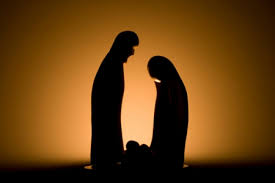 Jesus didn’t lead an easy life on earth.  He wasn’t born into a wealthy or influential family.  Rather, he came as the son of a carpenter.  Jesus’ family felt the full impact of the Roman occupation of Palestine and were even forced to flee the country and live as refugees in Egypt for several years.  As Jesus grew older, he didn’t have the advantage of a rabbinical education.  Instead, he learned a trade.  And when he began his ministry, he didn’t go to those who had money, power and influence.  He chose to walk among the outcast, the poor, the sinful and the needy.

This, then, is what we should celebrate at Christmas.  That God chose humility and love over power and might, and that choice–that gift–led to the greatest victory humanity has ever known.  Love conquered Death. 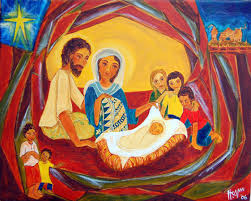 Sometime in the course of the next few days, I would encourage you to ponder the baby Jesus sitting in your manger.  Kneel before the creche.  Hold baby Jesus in your hands.  Trace the outline of his tiny form.  Consider his sacrifice–his gift of humility and love.  Then, ask Jesus to once again make his presence known in your life this Christmas.  And celebrate with others his redemption, love, forgiveness, peace and victory.