On Veteran’s Day, I often find my thoughts circling back to my grandfather. My grandfather was a WWII veteran, a private in the 9th Army. He trained with horses in the deserts of Nevada, but was sent to France in the second wave of the invasion. Although he served for just a little over a year, those months battling through Europe left a defining imprint on his life. He and I talked endlessly of his experiences during WWII. I was fascinated at all he had seen and done. Of course, there were stories he wouldn’t share–couldn’t share, even after all those years. He was awarded three Bronze Stars, but never spoke of them. My dad pieced those stories together when he accompanied my grandfather to an Army reunion.

Whenever my grandfather shared his experiences during battle, it was always with a dose of self-effacing humor, maybe even indifference, about his own contributions to the war effort. To hear him tell it, the courage to continue on in the face of battle was no big deal. Like many veterans returning from active duty, he took the path of humility. You just did what you were supposed to do, and didn’t worry about the rest.

This casual courage was a hallmark of his personality for the rest of his life. Truly, the man was unflappable. He greeted problems that would send most people into a tailspin with a chuckle and shake of his head. He was always decisive, and never seemed to question a decision once it was made. What he would never say, but what I gathered over the years, was that he never really expected to come back from the war. At some point, he made his peace with the idea of his own mortality, and every day he rose from his bed he accepted as a gift.

My grandfather had a courageous heart. But the peace which gave him courage didn’t just come from a gratitude for life, it came from a deeply rooted understanding and appreciation of where that life came from. Each day, my grandfather would begin with Scripture. Each day, his Bible would be placed on his lap, pen in hand, and he would read, pray, and think. Each day, he pulled God’s promises from the page and applied them to his life.

Do you know the one command God issues over and over again in Scripture?

It’s a command that echoes through both the Old and New Testaments. When the Israelites stand on the precipice before hostile nations as they journey toward the promised land, God calls, do not fear. As David is pursued by his enemies God tells him, do not fear. As Jeremiah faces exile and possible annihilation from a foreign power, God reminds him, do not fear. As the disciples cower in the hull of a wave-tossed boat Jesus speaks and says, do not fear.

And do you know why God commands generation after generation, do not fear?

It’s because he has, to quote a familiar refrain, the whole world in his hands. God created the world and all that is in it. There is no knowledge he does not possess, no problem too complex for his understanding. He knows the created, intimately. No thoughts, motives, plans, or outcomes are hidden from his sight. God is. God was. God always will be.

Therefore, how can we be overcome with fear? God is standing at our side. He goes before us and follows behind us. He walks beside us and hovers above us. God surrounds us with his presence, even when it seems as if we’re standing alone in the darkness of night. God is there.

We are called to be people of courageous hearts, not because we know life will always turn out okay, but because we know God is there through it all. Our courage, like our hope, comes from the Lord. No matter what we face, we can do so confident in the knowledge that God is by our side. Even if we fall in the midst of the battle, God is still there, carrying us home.

This week, remember: God is with you, and therefore, you are a person of courageous heart. 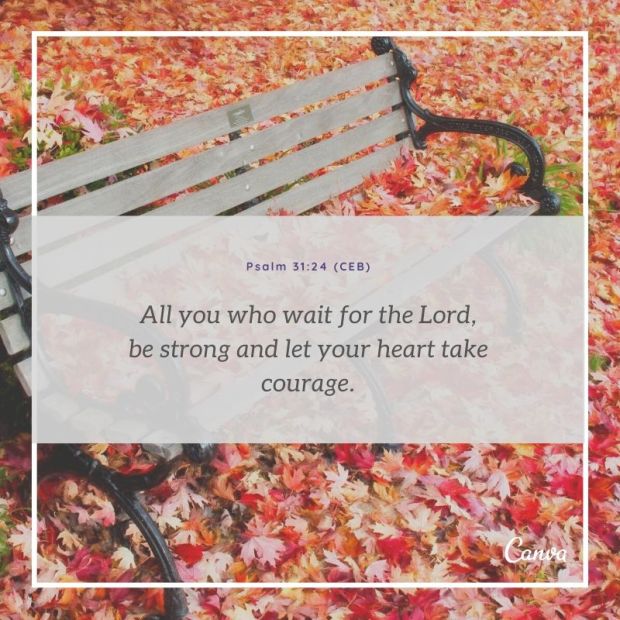