Sometimes God speaks softly, his voice so quiet that you have to strain to hear it. Other times, he speaks in a resounding gong that echoes over every aspect of your life. In the past few weeks, I have heard God resounding. I began a Bible study with my women’s small group based on Barb Roose’s Surrendered: Letting Go and Living Like Jesus. Roose discusses the Israelites as they journey through the wilderness and stop, poised at the edge of the Promised Land. Three days later, my husband preached a sermon using some of the same Scripture passages. I have walked with God long enough to know that when the same Scripture passages appear in your life within days of each other, it is not a coincidence and you need to pay attention. I abandoned my reading of the book of Romans (great book…but not where God is leading right now) and turned, instead, to the book that God kept calling out over me….Joshua.

There is a word in Joshua that God wants me to hear. And, perhaps, he wants you to hear it, too. You see, Joshua opens with the people of Israel in a time of transition. They are standing at the very edge of the Promised Land. After 40 years of wandering the Judean wilderness, they are there. The problem is, other people are there, too. And these people have been there for a long time. They’ve built cities. They’ve built armies. They have kings. The Israelites were lacking in all of these things. Moses was gone. He died while the people were in Moab, still wandering the desert, and was buried in a valley in an unmarked grave. (Deuteronomy 34:6) Joshua was the heir-apparent…a gifted soldier and faithful follower of God who had been by Moses’ side throughout the wilderness journey. Joshua had been told by God that he would lead the people into the Promised Land. But he wondered, standing before the Jordan River, would the people who rebelled against Moses actually have the faith to take what the Lord had promised would be theirs?

The Israelites face a crisis of faith. Who should they follow? Who should they believe? What is the right thing to do? Do forge their way across the Jordan River and charge a fortified city? Or, do they hang back and make a home in the wilderness ? In the first chapter of Joshua, God gives Joshua a pep talk. He reassures Joshua that Joshua is, indeed, the man for this job, and that all of the promises God made to the Israelites are about to be fulfilled. God also provides encouragement.  4 times in this chapter of only 18 verses God says to Joshua: “Be strong and courageous!” 4 times!

The first real test for Joshua comes shortly after this divine pep talk. The people are at the Jordan River, which is running at flood stage. Being a Missouri girl, with the confluence of the Mississippi and Missouri Rivers, I know rivers at flood stage. The number one rule when facing a river at flood stage is to turn around and go the other way! But that is not what God tells Joshua to do. With the echoes of “Be strong and courageous” ringing still ringing in his mind, Joshua commands the priests to carry the Ark of the Covenant into the river. And lo and behold, at the very second when the first priests’ toes hit the water, God acts. Just as with the Red Sea, the waters of the Jordan part, the ground dries, and the people walk through.

There was no mistaking that this was indeed a miraculous supernatural event. God proved to the Israelites once again that He is their leader, that He loves them, and that He has a plan for their future.

After the people cross the Jordan, but before the Ark is carried to shore, Joshua issues one more instruction. He tells the 12 tribal leaders to go back to the river and gather one stone each from the dry riverbed. He then instructs each of these men to carry their stone on their shoulders, high enough for all of the people to see. “These stones,” Joshua calls out, “are a symbol…an enduring memorial for the Israelites.” These stones, ordinary river stones, are a sign for future generations of the faithfulness and power of God. 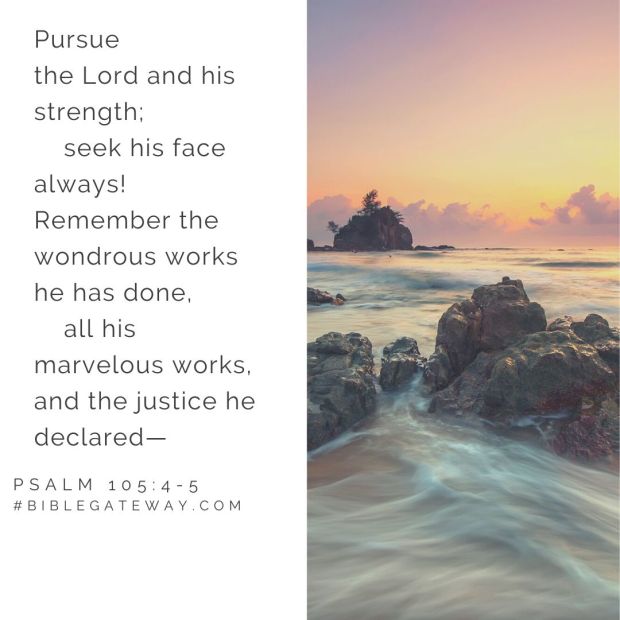 The Israelites stacked their stones at Gilgal, so that “so that all the earth’s peoples might know that the Lord’s power is great and that you may always revere the Lord your God.” (Joshua 4: 24) I don’t think it’s an accident that these stones were placed in a location where the Israelites would have to pass through if they were retreating. Those stones were stacked before the Israelites began the fight for the Promised Land as a reminder, in the thick of battle, that God would always provide. Life can be brutal. It can be unfair and unjust. It can be tragic and painful. We fight battles: relational battles, health battles, financial battles, addiction battles. Yet, along the way, we pick up stones. Each time God provides, each time God heals, each time God sends a friend for support, each time God opens a door or a window, each time God brings us just what we need we pick up a stone. It is a stone of hope, of faith, of reassurance that all will be well. Yet, often, we let our stones fall. We let them become scattered across our soul, more of a hindrance than a help. The message in Joshua is clear: we need to hoist those stones and stack them in a place of prominence. We need to make sure that we have placed a reminder for ourselves of God’s goodness and providence in our place of retreat. But, our place of retreat is the path forward for those who follow us. In that way, our sacred memorial is a call of encouragement, a marker that clearly says “This way forward!” to those seekers who come behind us.

This week, I want to encourage you to gather some stones. Hoist them on your shoulders and pile them up until you have a tower of promises fulfilled by God. If you’re a visual person, go out and get some rocks. Paint or write the promise fulfilled on each rock. Or, if you’re a task master, consider writing a list of all of the promises God has fulfilled in your life. Don’t hesitate to share these stones with others…sharing the Good News of God’s love and faithfulness to someone else who needs to see those promises fulfilled.